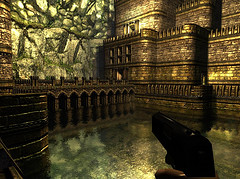 Sauerbraten (a.k.a. Cube 2) is a free, open source, both multi & singleplayer first person shooter game. The first version of Sauerbraten came out in May 2004, while the latest release, dubbed the “CTF Edition”, debuted on June 17, 2008. It was built as a major redesign of it’s predecessor, the Cube, by Lee Salzman, Wouter van Oortmerssen (the original creator), Mike Dysart & Robert Pointon. Just like in the original game, the main emphasis falls not on the pretty graphics & load of functions (although there is plenty of both!). The main objective for the game creators was to allow for seamless and dynamic in-game map/geometry editing, while still keeping the source code clean & simple. They’ve done such a great job that in the latest version of Sauerbraten even gamers playing together online can co-edit a level at the same time.

Rendering engine
Cube 2’s rendering engine is designed around modern graphics processing units, which perform best with huge batches of geometry already stored in video memory. Lighting is precomputed into lightmaps for efficient batching, with an additional stored directional component, that allows for efficient shader-based lighting effects. The original Cube’s rendering engine assumed that overdraw (where polygons that do not appear in the final scene are occluded via the z-buffer) was more expensive than sending new streams of triangles to the graphics processing every frame, which vastly limited its performance on more modern hardware where memory bandwidth is a greater limiting factor. The latest release (“CTF Edition”) supports a precomputed visibility system (PVS) for graphics cards that do not support hardware occlusion.

Gameplay
The game currently has singleplayer and multiplayer modes. Multiplayer functionality is possible with LAN, Local, and Internet play, which gets its server listings from a master server. Online offers deathmatch, last man standing, “Capture” (where teams vie over control of points on the map), Quake-style Capture the Flag, also instagib versions of some of the game modes (Instagib, Insta-clan-arena, insta-capture) as well as online cooperative map editing, which is one of Sauerbraten’s most interesting and popular features. There are also single player modes featuring both episodic gameplay and also deathmatch on multiplayer maps with AI bots instead of human opponents over the internet.

You can learn more about the Sauerbraten’s predecessor – the Cube (a.k.a Cube 1) here.