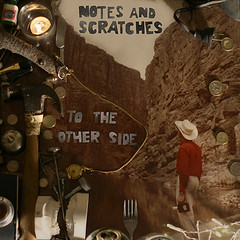 Notes and Scratches: To the Other Side

Notes and Scratches is a pop (maybe even pop-rock) band from Chicago. They’ve been together since 2005 and to date released one other album entitled “Uh-Oh” (which is also licensed under CC and available for free download here). Now, after two years and two line-up changes, Notes and Scratches is ready to present their second record, “To the Other Side.” Joshua Dumas, the principal songwriter, described this collections of pop songs as “the spaces between things: between past and present, remembering and forgetting, forever and never again.” He adds “this recording is an attempt to make sad songs feel celebratory. Regret and hindsight are often more complicated than a series of minor chords can reveal. I am hopeful these songs reflect some of that depth.”

To the Other Side is a small everyday journey of lost love and love remembered fondly, of old hurts forgiven and of today becoming tomorrow.
This album was one of the first recorded by Matt DeWine at the new incarnation of Pieholden Suite Sound. Members of Notes and Scratches helped relocate the studio from Chicago to Rantoul, IL. Using archaic and often broken equipment, the band coaxed these songs out of a guitar once owned by Neil Young and a temperamental organ that’s appeared on many classic Americana records. All of this happened while DeWine rewired parts of the new studio on the fly.

This album will be available for free download on RockProper.com, March 30th 2009. Rock Proper is an online music distributor built to take the place of traditional record labels and deliver music made with integrity directly to listeners around the world. Whistler Records will release a 7” single of “this Side” and “the Other Side” at a free release show on April 2nd, at the Whistler (Chicago IL).

Tracklist:
01 the Captions
02 the Finest Words
03 this Side
04 the Scrapbook
05 the Compromise
06 the Other Side