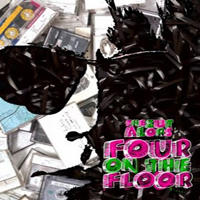 The Zut Alors – a free bedroom pop/indietronica album from Nashville

Based on the name of the band itself, you just know the members of Zut Alors probably passed French with flying remarks. Zut Alors, actually, is a French interjection that more or less means ‘dang’ or ‘dammit’. Though dang or dammit would have made catchy band names all the same, zut alors definitely takes the price of the most inventive and clever band name based on an interjection.

The band is made up of four members: Nick Bennett, John Marshall, Will Reiss, and Zac Stred. Currently one of the hottest bands in Nashville, Zut Alors performs what they call bedroom pop. They also tag their music as indie pop and indietronica. People like me didn’t get how exactly this genre sounded—it sounded more like an attempt to be creative than an actual musical genre.

And yet, once you listen to some of their songs, such as Cheers and The Killing Kind, you will get exactly what they mean. No wonder their first single, The Killing Kind, was called ‘one of the best tracks to emerge from Nashville’ by the Nashville Scene just this year. In fact, they are part of Experimental Institution, Nashville’s go-to authority when it comes to news, music, movies, and everything about entertainment.

The band has been performing in and out of Nashville as early as March. Two big events that they are holding right now are the Open Lot Session 2 (an exhibit of music and arts) and the recent release of Zut Alors!, their recent EP.

Most importantly, the Zut Alors values the Nashville music scene so much that they have recently released their own podcast, Four on the Floor. Its first episode has already aired and is currently open for subscription. The first volume, as a matter of fact, is filled with exciting performances from a couple of indie bands in the Nashville music scene.