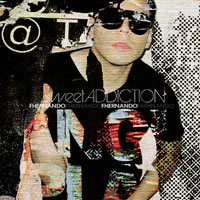 Fhernando is a great young Mexican DJ whose most recent album, “Sweet Addiction”, got some amazing reviews on free music download websites and social networks. Fhernando, or Fernando Ramires Rios, has been composing music since he was a teenager and has already released several EPs and singles. “I Love New York”, his previous release, was a house/trance/electro composition. “Sweet Addiction” falls in between the disco/house/funk genres, with more complicated arrangements and “sexy & glam” style. Both are happy, energetic and capturing.

In our little email interview Fhernando said he creates music about love, happiness and having fun. When you listen to the album, you are meant to just throw yourself in the music, forget all your problems and feel like you can dance the whole night away. Composing music is just that for Fhernando, a way to fully immerse himself in something he loves and enjoys tremendously, it’s his way of life, his “sweet addiction”.

When I listen to Fhernando’s music while working (and up till now I’ve heard the album at least 10 times!) it makes me feel uplifted, happy, powerful and full of energy. Everything just seems easier and less of an issue with his soundtrack. But hey – maybe it is just me!

Fhernando decided to license his music under Creative Commons Attribution-Noncommercial-Share Alike 3.0 License to allow everybody to share his music free with all their friends and remix it, so the good mood and creativity can spread as far as possible. He is a big champion of this licensing format and downloading music online – as long as it is legal.