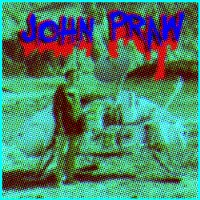 Wisconsin based musician, John Praw, creates a stunning work of ambient sounds that swirls and sweeps you away with its moody soundscape. This self-titled release is a compilation of tracks that were written and recorded between 2006 to 2011.

The album is actually available for sale but you can grab the download as long you credit back to the site and the artist, of course.

This first debut record is an amazing mixture of sounds that reflect a dark, gloomy mood. Despite the gloom, it’s a beautiful piece that’s worth a listen.

Listening to this 10 track compilation is much like peering inside a cave that’s filled with a wealth of sounds. There are various instruments, samples and odd sounds circulating throughout the record. Despite the diversity though, it’s a coherent piece that tickles the senses.

The album opens with the 5 minute haunting track, Vokaler. Imbued with wonderful vocals and a slightly haunting sound the song grows and swirls around you like smoke; definitely one of my favorites from the record. Tracks like The Speed of Which is Undertermined and Bomullspinnar (along with pretty much all of the tracks) also resound in a darker vibe. The songs are built to echo the mysteries of life without really going too far down on the negative.

When listening to the record, you can tell there’s a sense of foreboding but there’s also a sense of hope; like knowing there is always a ray of light despite the darkness of an afternoon. Some of the songs have an orchestra feel that sweeps and glides the listeners all over. They definitely carry a depth and allure that’s hard to explain. It’s something that listeners can only begin to understand as they listen to it.

John lists down Brian Eno, Eluvium, Harold Budd, Chihei Hatakeyama and Alva Noto, among others, as his influences. This compilation was released last March 2011 and it’s been getting plenty of fanfare from ambient and techno enthusiasts.