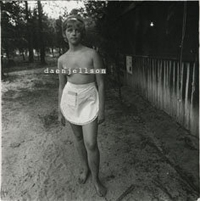 Daenjellson “Walk Your Soft Skin On The Edges”

If Daenjellson isn’t an interesting enough name for a singer for you, then perhaps nothing else will make the cut. More than his interesting name, however, Dane’s music is more than worth listening to. His EP, Walk Your Soft Skin on the Edges, is the result of years’ worth of introspection and adventure from different parts of the world. It has provided listeners like me with an impression of the things to expect of Dane, especially with the full album release of Jesus Loves.

The biographical information placed by Daenjellson in his social networking sites can be considered wild by many. He writes about his former careers as a blade painter and a songwriter. He has penned memorable songs such as Baby, Now That I Found You, Waterloo, and How Deep is You Love. He then called it quits after he talked about “attending one too many wasted nights at exclusively private celebrity parties and waking up one too many morning after next to another Samantha Fox lookalike.”

After this, he went around and traveled: from Borneo to Mexico. He finally went back to music in the summer of 2008 and started recording songs with his laptop. Along with him are cello, violin, piano, and French flute accompaniment with his coach and mentor Scott Walker’s wife, Fiona. The result of his comeback to music? A slew of songs that he categorized under ghettotech/electroacoustic and punk indie music.

The somewhat mellow and electronic pop music he has in his 5-track EP Sampler, Walk Your Soft Skin on the Edges, is heavily influenced by his travels from Belgium and Brazil to Australia. No wonder he lists fresh air, women, travel, sunsets and fauvism among as his influences.

What’s noticeable about Dane’s songs is the elaborate background instrumentals surrounding his songs. Maybe it’s the result of the great deal of experiences he’s had after travelling for so long or the product of working with a limited range of instruments—in one way or another, the result is an effective combination of Dane’s vocals and Fiona’s instrumentals.