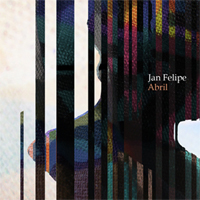 One of the things I really love about Creative Commons music is the potential to connect directly with artists. It helps increase my enjoyment of the music, knowing a little about what these musicians are like and understanding their drive to create.
Often they contact me via last.fm after seeing their albums in my library, and the conversation develops from there. Sometimes, as in the case of Brazilian songwriter Jan Felipe, it can lead to some very interesting things.

Felipe’s debut album, Abril, is apparently a work in progress, as several weeks after I downloaded it, he contacted me to let me know that he’d added a new song to the tracklist. I love this idea of an album having a serial quality, and I’ll admit that ever since Felipe kindly sent me an mp3 of the added track, a dark tune called “Quiet People” that’s reminiscent of pre-Kid-A Radiohead, I’ve been hoping that he might add even more songs to the album at some point. I’m not sure if the effect was intentional, but in any case, let this be a lesson to CC artists everywhere: keeping your listeners waiting for the next episode lends an air of excitement and expectation that music hasn’t had since… well, since the age of instant downloads began.

You might think an album that arrives in bits and pieces might lack cohesion, but Felipe’s styles and influences are so diverse anyway that stirring things up with new and different songs is just par for the course. The tracks range from acoustic indie to lightly electronic, Felipe sings in no fewer than three languages (Portuguese, French, and English), and for two of the tracks he is joined by talented vocalists Julia Vaz and Mariana Albuquerque, respectively. Overall there’s definitely a Brazilian feel to the album, but there’s still an unmistakeable trip-hop heritage there, and I think if you like Massive Attack or the more ethereal aspects of Zero7, you’ll get along with this collection of songs just fine. There are even a couple of guitar-driven tracks to keep things from getting sleepy.

If you dig around you’ll find that Abril is available in many of the usual places (Jamendo, BandCamp, and so forth), but the number of tracks varies from place to place. It appears that as many as nine tracks exist so far, but only six of them made it to the linked download above. If you want to check out all nine tracks, the only place I’ve seen the full collection so far is on the last.fm page for Abril, where all the tracks are available for free download. And you never know – if you start listening to Felipe’s stuff, perhaps from time to time he’ll send you a new addition to the album.