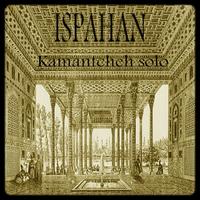 Ispahan – channeling the sounds of the old Orient

I live in Asia Minor, and when I first heard the melancholy and mysterious strains of Christian “Kiane” Fromentin’s Ispahan, my first thought was that this guy must be making music in my local area.

I was surprised to find out that he’s actually in France – he just has a very innate sense of what the region of the Near and Middle East sounds like, and a talent for evoking nostalgia… even for listeners who have never been to this part of the world.

In the interest of being clear and upfront: this collection of songs is not for those who expect catchy melodies or typical modern song structures. It is, however, for those who like to use music as an escape, and who enjoy being taken to another place for a while. And if you have any interest at all in what a modern musician can do with classical West Asian instruments… okay, I make it sound like this guy’s niche is so niche-y as to discourage a potential audience, but really, this music makes for a fascinating and relaxing listen.

Imagine all your stereotypes of what life in ancient Arabian lands must have been like: hot deserts, bustling outdoor markets overflowing with silk and spices, brave men riding on the backs of camels, beautiful and mysterious women in satin pants and chiffon veils. It seems like a scene out of One Thousand and One Nights, and indeed Ispahan would make a great soundtrack for those stories. But it’s not all about the cliché – Fromentin’s expertise ranges from the pure “Arabian” Middle East sound, to the darker musical styles of rural Azerbaijan. Much of his music even has a twinge of Turkish flavour to it. Clearly this is not just a case of a musician who has done his research; Fromentin has this music in his blood. You can feel it in every phrase, in every winding turn that these exotic and beautiful melodies navigate. He only does this one thing, but he does it very, very well, and the texture of it is so rich and varied that there’s no chance of getting bored with it.

If you’re not used to branching too far away from modern verse/chorus songs, there are plenty of ways you can use this album to beautify your music library. It’s great when you’ve had a hard day, and you can kick back on a quiet evening with a glass of wine and some low lighting. It also works well as background music – play at low volume when you’re reading, or having a deep one-on-one conversation. I even like a little of this music before bedtime, when I’m trying to wind down and close out the day on a relaxing note. Ispahan has that kind of soothing quality to it, and I think you’ll find it works well in a variety of low-key situations. Give it a shot and see what you think.

This work is licensed under a Creative Commons Attribution-Noncommercial-No Derivative Works 2.0 France License.