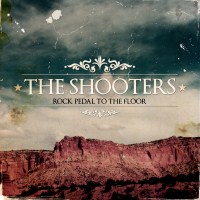 Formed in 2008, hard rock group, The Shooters, have finally created their latest EP, Rock Pedal to the Floor. The album comes with 7 rock and roll tracks that means nothing but business.

With hard rock guitar, thumping loud drums and grungy vocals; there’s no mistaking this record for anything else other than pure rock and roll. The group is made up of Alex, Carlos, Danishoot and Marcos.

This rocking act was actually borne from the ashes of another group, Shoot’em Up.

After their breakup in 2004, the crew decided to reinvent themselves and christen themselves with a new yet similar moniker, The Shooters. Their new sound is more mature and incorporates varied styles and sounds. Alex and Marcos are the latest to join this four piece band and so far they’re hitting it off.

Rock Pedal to the Floor is actually just a regular rock album where you’ll hear thrashy loud guitars, fast drums and characteristic throaty vocals, however, there are several tracks worth exploring. Personally, it’s hard for me to like the vocals but I do admire the instrument work. It’s not exactly groundbreaking but the tracks do work great when you just need to take out some stress by listening to something really loud.

Some of the worthy tracks for me include Stuck and Stonefly, both of which contain long portions of nothing with just the instruments thrashing about into a collective rock and roll stream.