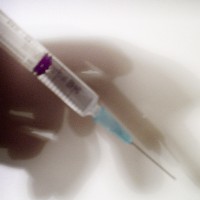 Nevroses comes equipped with 11 French rock tracks that showcases plenty of grunge style guitars, electronic beats and angst driven drumming. Most of the songs have an industrial/dancy feel to it and the vocals are interesting. Oddly enough, if you don’t listen closely, you won’t even notice that the guy is singing in French not English.  If you are looking for a band that sounds like popular indie and Jamendo favorite, Fresh Body Shop, this album is a good way to start.

Although you can definitely call their music as “pop rock,” there’s no doubt that it tips the scale to the rock part as opposed to the pop side. Listening to Nevroses makes you think of hard rock grunge bands in the 90s if only they wailed out French lyrics and were slightly (every slightly) had a happier disposition.

It’s not unusual to hear hints of influences from bands like Nirvana, Nine Inch Nails, Stone Temple Pilots, Deftones and Soundgarden, among others, since these are some of the bands that the members of Miss Daisy Black have on their playlists.

Nevroses opens up with an acoustic upbeat track “Le Dernier Mot,” which works great in letting the listener have a taste of what the rest of tracks are like. Although its not as heavy as other songs on the album, the guitar work and throaty vocals make it work. The humming in “Mort Ne” is catchy enough to induce LSS to anybody who listens to it long enough.

Personally, I think the album is a great listen, although the quality of the recording could be greatly improved. Not sure if this is caused by mixing though. Anyway, despite the lo-fi quality, the album is a sure hit for those who love alternative, pop rock and grunge. This goes, even for those who have zero French comprehension.