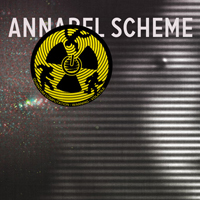 Sloan used Kickstarter, a social fundraising platform, to garner patrons for Annabel Scheme prior to publishing. By offering a number of incentive levels with varying amenities, Sloan was able to raise just shy of $14,000 for the project â€“ over $10,000 more than he had originally asked.

Had he not been able to raise the original goal of $3,500, no backers would be required to pay, making the process low risk for those looking to fund, as Kickstarter puts it, â€ścreative ideas and ambitious endeavors.â€ť

Towards the end of the fundraising round, Sloan decided Annabel Scheme was to be released under a CC Attribution-NonCommercial license â€“ more than that, he chose to devote $1,000 of the excess budget to a remix fund. Sloan put out an open call for pitches on interesting ways to take the book and build something new from it. These pitches are now being voted on by the bookâ€™s backers, with an announcement on fund allocation forthcoming.

A unique project all around, it is no wonder Kickstarter awarded Annabel Scheme best project in their 2009 retrospective. You can download the novella for free at Sloanâ€™s website.