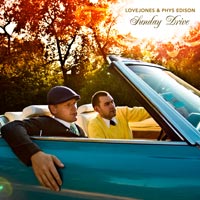 Finding the perfect chemistry between producer and MC is a very rare if not magical occurrence. Â With the single driven, mixtape economy of hip hop, finding this connection for an entire album seems virtually impossible. Â One duo however, has not only managed to find that chemistry and share the same vision, they have also managed to create a conceptual piece of work that flows seamlessly from start to finish without skipping a beat. Â

UPDATE: LoveJones and Phys Edison’s song “Sit on the Moon” was included on FrostWire FrostClick 2009 Compilation Album Volume 1 celebrating the first 1,000,000 downloads of 2009.

As soon LoveJones aka Mike Schpitz and Phys Edison met, the magic began immediately. Â In fact, the first day they met, Jones wrote the energetic, show starter The Get Up and Sunday Drive was born. Â Although, the deeper they got into the album, the sound and the theme of the music changed, the chemistry strengthened and the music continued to flow effortlessly. With songs like DownTime and Sit on the Moon, Sunday Drive became a musical and literary journey of a young man adjusting to his life in a new city. From the monotony of a first 9-5 to the struggles of failing relationship, Sunday Drive provides the listener with insight rarely seen or heard in hip hopâ€™s current client.

Over Phys Edisonâ€™s soulful, mellow production, Jones captures some of the universal emotions people deal with on a day to day basis. While using an American classic car, a Cadillac, and a beautiful day as the setting for their journey, LoveJones and Phys Edison have created a near-flawless body of work that will be able to withstand the ever-changing, finicky hip hop world.

We conducted a little interview with LoveJones aka Mike Schpitz so we could get to know him little better. Here are the excerpts.

FC: So how do we call you LoveJones or Mike Schpitz?
LJ aka MS: Mike Schpitz was inspired by the Olympic swimmer Mark Spitz. My producer SLOT-A and I, made a song where one of the adlibs says SCHPIT, so we named the song Mike Schpitz and that just became my name. LoveJones is a name I used for a couple projects but Mike Schpitz just fits better

FC: How is “Sunday Drive” different from your previous releases?
LJ aka MS: This album is my 3rd project but my first all original album. It is basically a collection of songs/lyrics about my first year in Chicago [all produced by Phys Edison]. Itâ€™s a lot more personal than any of the previous music I released and it is definitely a conceptual album. We didnâ€™t focus on making songs, we focused on making a whole album that flowed perfectly from beginning to end.

FC: Give us a brief run-down of your music background
LJ aka MS: I started writing poetry when I was 14. I rapped a little bit in high school but didnâ€™t really start writing music until I was 19. I was in a group called The Full House Crew and we were just recording random music and performing around Kansas. When my brother moved to New York, we stopped making music but I started working with some guys in Kansas called The Only Ones. We never really put anything together as a crew – mainly just solo stuff. I released my first official project, Love Potion Number 9th in December of 07 that featured The Only Ones. Since then I have just been doing solo stuff and working on my albums/mixtapes.

FC: What inspires you to create music?
LJ aka MS: The fact that I love making music inspires me the most. I love to write. I love to record and I love to perform. It never feels like work to me. Writing is my biggest outlet for stress and is also my favorite pastime. I am also inspired to bring back that feeling hip hop used to give people. I think artists, labels and fans have forgotten how good music makes people feel. I want to bring that feeling back and make music that isnâ€™t dictated by the times or the current state of the industry but that will be timeless

FC: What’s your outlook on downloading music online and the distribution system in general?
LJ aka MS: I think there is nothing anyone can say about downloading online. It is easy; itâ€™s usually free and accessible to nearly anyone. Record companies neglected to deal with the issue when it first arose so they are paying the consequences now. (…) I personally think downloading is cool because it allows artists without a budget to put their music out and get it to a broader audience. More people will check something out that’s free than if itâ€™s 12.99 in a store.
Downloading has brought forth another problem that I think could ultimately be the demise of quality music and that is the disposable aspect of the music. Artists used to release albums every few years. People would be waiting literally YEARS to hear anything new from their favorite artist. That made the music more valuable. Now artists, major and independent, are releasing new music what seems like every day and that doesnâ€™t allow for their fans to digest anything. A song has to immediately draw someoneâ€™s attention or else it has no replay value. The current fan of music needs immediate gratification.

FC: What are your thoughts on the current state of the record industry?
LJ aka MS: Record labels arenâ€™t giving people million dollar deals like they used too. They donâ€™t care about artist development. They want immediate success and immediate turn around which is unfortunate because people are being signed not based on their talent, but based off one song. That is why you hear no progression in their music later – the artists arenâ€™t being allowed to grow and change. They are expected to sell X amount of records or singles out the gate. (…) The biggest names in music refuse to put out great music because they want to stay relevant and keep getting money. That why the music is being driven back to the underground where it started. (…) People are starting to do it for the love again, which is a great thing in my opinion.

FC: Do you have any concerts coming up? Where can we see you next?
LJ aka MS: I plan on hitting the scene in Chicago, New York, Toronto, LA and Kansas this fall and winter with several projects under my belt. People can expect an energetic show – I rarely perform the same set. When people look at me their expectations are pretty low so I like to blow [the first-timers] away and do something new for the people that are familiar with me.