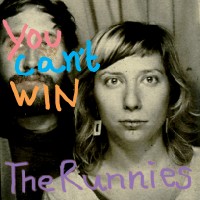 The Runnies: You Can’t Win

Exploding with a raw rock sound that echoes a lofi version of Juliette Lewis and the Licks crossed with the swagger of The Doors; The Runnies have that likable dirty rock sound that makes them difficult to ignore.

This Chicago trio knows how to capture an audience. Mixing 60s garage rock with a church revival feel isn’t easy but they nail it sweetly thanks to front woman Mary McKane’s strong vocal presence; some really sweet guitar riffs from partner, Russ Calderwood and drummer Brett Swinney’s steady pace. Armed with a Farfisa, The Runnies create tracks that are raw, a bit out of touch and quite danceable in an indie rock kind of way.

Contrary to the title, You Can’t Win is actually a winning EP that was recorded from August to November 2010 and completed by March 2011. Instead of going full digital, the entire set was done on reel-to-reel tape resulting in a pretty raw and textural performance.

Although Mary McKane has since been a staple in other bands (Outer Minds and Lover!) The Runnies was her first band. Joined by her fiance, Russ and drummer, Brett; they create something authentic and set apart from all the sugarcoated pop stuff we’re bombarded with today.

Opening single, Easy, entices with its danceable beat. Strong, almost exasperated vocals mold the song and transforms it into an easy hit among listeners. There’s also Sweetness, which deserves to be sung in an intensely cool church somewhere. Mary’s Joplin-esque vocals hold center stage yet again but the guitar and drums that accompany her resound in beautiful melancholia as well.

You Can’t Win is easily one of the best EPs around and it’s exciting to see which direction the band takes after this. They have a very distinct sound for modern indie rockers and its definitely something worth paying attention to. The best part though is that the compilation is offered for free download. You won’t regret grabbing this one.