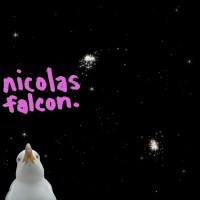 This acoustic, indie folk number from Nicolas Falcon is perfect for a dreamy escapade. Filled with beautiful acoustic swells and laid back vocals, this self titled debut from this Florida musician is a definite keeper.

From whistle solos, quirky lyrics to simple upbeat guitar strumming, it’s hard not to enjoy this record. It might not break into the Top 40s but it’s a beautiful compilation worth listening to. There’s not much info about this musician out there. According to his Jamendo page though, the album was released some time in September 2009 and was uploaded just around March of this year.

What I love about this album is the descriptive and mundane lyrics that he adds along with his music. Serious subjects like suicide are  given a quirky and cynical twist in Cyanide Surprise. With lines like, “Sip some cyanide, and one of my drinks tonight. Come on baby, just catch me by surprise;” it’s hard not to smile and feel lighthearted even if the subject is a bit morbid. Other lovely tracks include the slightly honky tonk, Greek Life, and the reflective yet fun, Reliable Source.

Even though the production values might not be at its best, it is a fun album to listen to. It’s perfect for people who love simple, poppy cuts with witty lyrics.