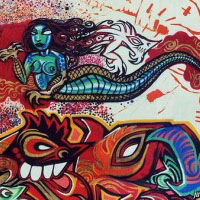 Just to Get a Rep

Graffiti arouses different reactions from different folks across all ages and social classes. Well done graffiti easily gets a nod of approval by the sheer sight of its stunning explosion of colors & innovative design. But these wall writings are also frowned upon mostly by people who associate this wall art to untamed behavior, violence and even crime.

Just To Get A Rep chronicles how graffiti came to form over thirty years ago, how it has thrived in spite of being restrained, and what steps are being taken so that graffiti gets its place in what people officially label as art.

Just to Get a Rep tells the story of how graffiti has become part of the culture in the less picture perfect parts of New York City and other major US cities like Chicago, Los Angeles, and Manchester. Film director and producer Peter Gerard dug deep into his pocket to travel in and outside the US, and get to the heart of graffiti from the graffiti pioneers in London, Rome, Venice, Barcelona, Paris, and Milan. The film also exposes the separation of graffiti and hip-hop, and how graffiti artists feel about being considered an offshoot of hip-hop.

For three years, Gerard was “out in the field,” gathering artful footage and talking to the masters and innovators of spray painting. He took about a year to edit this truly significant and authoritative graffiti documentary.

Informative and sincere, Gerard’s tight direction of Just To Get A Rep makes for a must-see documentary for graffiti and hip hop enthusiasts, as well as those who are curious enough to know more about the separate worlds of both art forms.