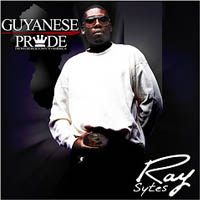 Ray Sytes came to America from Guyana as a young child with his family like most immigrants for the American Dream. It’s here in America that his love for Hip Hop music grew as well as his talent for the art form. He’s proud to represent the cities of Brooklyn and Queens in New York with his musical talent.

Ray Sytes is officially the first Hip Hop artist to be promoted on the welcome screen of FrostWire with his album Guayanese Pride from GeorgeTown to America, which includes free 8 songs and album art.

We had a chance to have a word with Ray, here’s what he had to say:

FrostClick: “What are your musical influences?”

Ray Sytes: “Growing up I can remember watching such artists as RUN DMC, LL Cool J and my favorite MC back then Big Daddy Kane on television rhyming and I just naturally gained a love for the music. Being from another country with an accent it was difficult to gain friends but once I opened my mouth to spit my rhymes it was easy to gain acceptance from my peers.”

FrostClick: “How did you start your career in music?”

Ray Sytes: “Over the years I kept perfecting my talent and in 2004 with fellow group Member and childhood friend BIG Vegas put out an album under the group name Major League Hustlaz entitled “The Product”. With the success and great reception from that project came the “The Re-Up” in 2007. We choose the name Major League Hustlaz because it best described our drive and determination to get our voices and music heard. Both albums were released under Clear Vision Entertainment, which was founded, by BIG Vegas and myself. Clear Vision signifies the clear vision we have to accomplish many things not only in music but our lives in general. Both albums can be found on ITUNES for sale as well as on many other digital download sites. You can Google Major League Hustles today or go to our official website www.clearvision-ent.com to find out more.”

FrostClick: “Do you write your songs?”

Ray Sytes: “After two albums with BIG Vegas, I decided to head in the studio and record an album that encompasses both my Guyanese heritage and culture with a Hip Hop flavor. Hence the album title “Guyanese Pride”. My ability to write has become so good that I’ve progressed to writing Reggae and R&B songs as well. My love for my heritage and Hip Hop will be evident once you hear this album. It’s a universal album with universal appeal. This project will be under my imprint PTM SQUAD (Power Thru Music Squad) and Clear Vision Entertainment.”

FrostClick: “Tell us more about the PTM SQUAD”

Ray Sytes: “The PTM SQUAD Movement consists of artists with a Caribbean background who also rhyme and sing. Once fully established we plan on incorporating other cultures into the movement.”

FrostClick: “Any other words for your fans?”

Ray Sytes: “Be on the lookout for the “GUYANESE PRIDE” album coming in summer 09 and other projects from Clear Vision Entertainment and PTM SQUAD. We are always looking to be contacted for shows and tours, so contact me at raysytes at gmail dot com.

I’d like to give thanks to FrostWire.com for the opportunity to be heard and God for the talent and opportunity to use it correctly. Shout outs to all my fans and future fans and all my Guyanese people.”