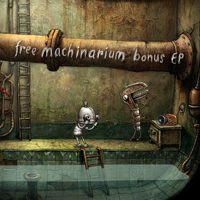 Machinarium is a amazingly simple, yet extremely entertaining point-and-click game created by a Czech independent studio Amanita Design. It’s genius comes from sleek & interesting graphics design, smart and engaging puzzle-solving levels and a really relaxing and one of a kind soundtrack.

Both the game and the soundtrack are for sale on Machinarium’s website, but the studio released a 5-track bonus EP as a free download to the game’s fans.

The entire soundtrack, as well as the bonus tracks, are the work of Tomas Dvorak and a small number of musicians contributing to the project:
Veronika Vlkova – rap
Vojtech Zelinsky – guitar
Petr Tichy – double bass
Matousov Godik – didgerridoo

I am generally not a big fan of industrial electronic music, but the entire soundtrack of this game was a pleasure to listen to – even when not playing the game. It has this weird calming, yet engaging quality to it with sounds that unmistakeably imitate machine life…

As for the game – if you are into puzzle solving, Machinarium will be an amazing treat for you. For the first time I though a flash game was entirely worth the money as it provided for hours worth of brain stimulating entertainment, oftentimes gathering the entire family around it.