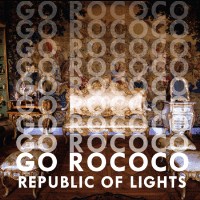 After receiving a huge amount of praise and positive reviews for their album as well as live performances, Republic of Light seems to have had a good start on their musical journey.

These Chicago natives created quite a bit of noise in the indie music world with their album Go Rococo. The crew is composed of Alan on vocals, Brian on guitars, Greg on keyboards and Rosie on guitars.

Combining a flurry of indie pop, new wave, great lyrics and tons of catchy rhythm; the band is easily likable while the record is a great go-to album if you want something to keep your energy up and bouncing.

I’m not going to deny that I enjoyed the album on first listen. There’s a fun and exciting energy that emanates from each track. Even though much of it sounds like a mix of new wave with the melodramatic indie pop of Spoon, it’s pretty hard to resist them and keep yourself from enjoying the record.

Kicking things off is title track, Go Rococo. It’s actually the shortest cut on the album at only 2 minutes. It combines keyboards, hipster style vocals and some catchy beat. The album then transitions into a full blown dance, hipster track, Lotus. With a mix of guitars and steady beat, you’ll find yourself toe tapping to this one. Meanwhile, 22centstamp is a fun lovin’ cut that extends with great lyrics and a jaunty rhythm. Alan’s vocal work is quite something.

Go Rococo is a great record to grab. Although the band’s sound quality isn’t as polished yet, they’re pretty close. They have all the right elements in place; given a bit more time to evolve, they’re sure to blow listeners even more with their sound.

You can grab the download over at BandCamp. And if the band is playing near your area, go ahead and see them. I hear they’re mindblowing live. Enjoy!