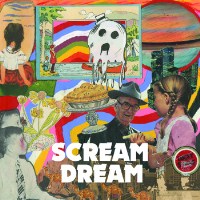 Flesh Forest and The Elephant Only Zoo: Scream Dream

Flesh Forest and The Elephant Only Zoo is a hodegepodge of sounds and genres. On the one hand, you get songs emanating with an indie electronic folk rock vibe, but as you progress through the album you encounter a darker, noise rock, experimental sound that leaves you wondering what happened.

Well, for one, Flesh Forest and The Elephant Only Zoo are two different bands. Although both hail from Massachusetts, sound wise, that’s about as far as similarities go. The former describe themselves as mainly into gothic/psychedelic electronica while the latter dubs themselves as belonging to the acousmatic/ tape music/ visual genre.

Despite the differences, this five-track mini record resonates with both individuality and coherence.

Initially slated for release on April 11, Scream Dream didn’t become available until July 2011. Opening with an electronic sample Sun Dog, the song evolves into a gentler and catchy indie folk pop track. The psychedelic harmonies and the eclectic vibe it exudes are likable and catchy. One of those tracks that you can play on a gloomy afternoon to keep you company. It’s then followed by Teenage, which resound in the same vibe. However, this one adds a tinge of  80s dream pop, like something the Pet Shop Boys might have put together. The samples are skillfully used, adding a rich layer to the song.

At the end point of Money Green, you’ll realize that the record is transitioning into a more psychedelic, experimental electro rock state. By the time Powercreep marches through, you’ll feel as if you just walked into a whole new dimension. Filled with jangly guitars, wailing (almost indiscernible) vocals, and noise filled ensembles; it’s definitely a lot to take in if you’re not into noise rock. Finally the title track, Scream Dream, also showcases a more disjointed, more experimental sound.

Overall, the last two songs might not be everyone’s cup of tea but I still think the record is worth a listen and a download if not for the rest of the tracks. The first three songs are better suited for those who want the traditional indie electro rock sound, but for those who fancy themselves a bit more into the weird side the last two tracks definitely cap the album to a tee.