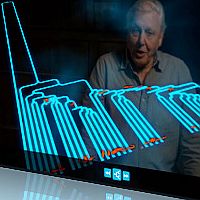 Darwin’s Tree of Life – see how living things are related

Tree of Life is a collaborative project by Wellcome Trust, BBC, and The Open University. It aired on BBC1 in early 2009 as part of BBC’s Darwin season. It serves as homage to Charles Darwin, whose 200th birth anniversary falls in 2009.

In Darwin’s “On the Origin of Species,” he used the term ‘tree of life’ to describe the evolutionary relationships between all living things on Earth. The collaborators intended to produce an updated version of the Tree of Life, created by Shadow Industries. Sir David Attenborough narrates this six and a half minute video, which invites you to “see how living things are related.”

A hundred and fifty years since the publication of Darwin’s book, everyone now gets a chance to spread knowledge and information on the history of the planet Earth. The video is licensed under Creative Commons, and you are encouraged to make your own version of the video with Wellcome Trust’s remixable files.

The project has used cutting-edge technology to present the latest scientific knowledge and produce a “visually stunning, fully accessible and scientifically accurate interactive Tree of Life.” Even individuals who are not inclined to super-analyze the great history of life (such as myself) will find this video to be very interesting, to say the least. This is perhaps the most technically elaborate video ever produced to illustrate the history of our planet. I’d recommend this to friends, especially those who are into video production and those who work in the academe.