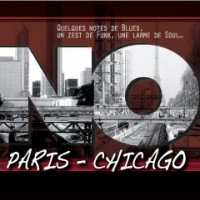 American blues jazz with a French aftertaste. An almost fool-proof formula for creating pop funk music for this French singer includes a “few notes of Blues, a zest of Funk, a tear of Soul.” Bizarrely calling himself, NO, French musician Olivier Nataf creates his own brand of blues jazz inspired tracks that are laced with French lyrics.

Paris – Chicago compiles 10 tracks that serve as a bridge connecting the American landscapes to that of the French. If you wonder what the blues sounds like with an international flair, NO, would be one act worth checking out.

After almost a lifetime in France, NO, decided to transplant himself to the busy city of Chicago. However, apparently, he hasn’t forgotten his French roots and his music is proof of this. Paris-Chicago encapsulates how the singer places an importance to the storyline and his French lyrics. On the other hand, whether he noticed it or not, American influences slowly crept into his style. Moreover, it was partly a factor that his own mother was a big fan of the “King of Rock and Roll,” Elvis Presley.

Some of the main influences that he had growing up included great rock and blues acts like Jimi Hendrix, Otis Redding, Queen, The Rolling Stones and Stevie Ray Vaughan.

The album features 10 original songs while there are two song covers, namely Higher Ground from Stevie Wonder and Sweet Dreams by the Eurythmics

Paris-Chicago was recorded and mastered for about 7 months of studio sessions. The artist claims that it took a lot of feet dragging to finally end up with the finished the product, yet somehow they made it work.

Related Links:
NO’s Official Website
NO’s Blog
NO on Reverb Nation
NO on Myspace
NO on Facebook