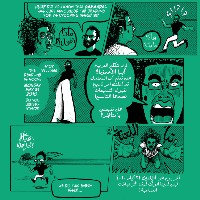 Samandal is a Lebanese, French and English comics slash magazine that caters to a variety of styles, themes and interests. It is also available in all three languages. Samandal magazine is released quarterly and the group that puts together the comics accepts contributions from almost artists and writers almost anywhere in the world. Moreover, the publication contains a creative commons license.

Samandal Comics “aims to lift the stature of comics to that of mature art form capable of tackling more than superheroes and their baffling hairdos.” The main theme behind Samandal is diversity and how this can also translate to unity in more ways than one. Samandal Comics is actually a compilation of various works from different people all over the world. It was started  by a group of artists and writers based in Lebanon as an outlet to express their desire for a better understanding of the art form. It is also a way to bridge the gap between cultural diversity and promotes artists and writers that are currently under the radar.

So far the magazine has released 8 issues and the soon to be released 9th issue is coming out. Issues 1, 2 and 3 are available for free download on their website and features unique stories from a variety of different artists and writers. The rest of the issues are available for sale in various places depending on where you are at. If you are interested, you can check out their Facebook page since they contain a list of  places where the rest of the issues for the comic magazine can be bought.