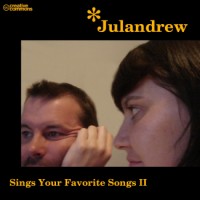 Sweet married couple making great music together. No, Meg and Jack did not get back together. Most people might think that creating music with a partner is simply too much, as if it’s not enough that you live in the same house; you have to work together? Well, not for Julandrew.

Brainchild of couple Julie Handy and Andrew Philip, the band’s latest lineup (as of October 2009) includes, Ryan Duffie on Guitar and K.C. Hawes Domingue on piano/keyboards.

Sings Your Favorite Songs II is a 5 song compilation of some tracks that the band has recorded. They contain both new and old songs.

Although not all songs are as catchy and dreamy as the vocals are, Sings Your Favorite Songs II does offer some sincere likable tracks that any listener can enjoy.

Starting their musical journey in August 2007, where the couple tied the knot and moved to Texas; Julandrew divided the song creation process, leaving Julie as the main songwriter and lyricist while Andrew added to it by figuring out the chords and percussion.

Like most self made bands, they uploaded their first two recordings online and were surprised by the positive feedback they received, not only from family and friends, but also from people all over the world.

To date, the couple still continue to churn out new tracks almost each month. Playing with various other musicians that play as satellite musicians for them.

Sings Your Favorite Songs II opens up with It’s Easy, which is probably one of the most lovable tracks on the entire compilation. The simple and often witty lyrics (I wish I were a movie star, I’d be safe in fancy cars…) makes it an instant personal favorite. The quiet acoustic guitar and simple beat lets a listener take in the song as well as the lyrics without rushing it.

Although for the most part the vocals are tolerable and complimentary to the music, there were obvious pitch problems, here and there. (Most noticeably in the song Closure.) Fortunately, these don’t exactly create lasting damage to both the listener and the songs.

If you’re looking for something simple and easy to listen to, then you might like listening to this mini-album. However, for those who simply dislike sugarcoated overly feminine vocals, it’s best to stay away. You can either love or hate this album. Personally, some tracks I love, others, I’m still trying to figure out.