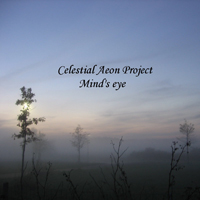 Mind’s Eye is exactly the type of album you should listen to if you are feeling nostalgic and emotional. The compositions in this track intend to evoke entrancing emotions that will lure listeners even deeper to its melodies. The only question that remains, however, is if this intention was ever really fulfilled. Favorably speaking, all 13 songs in this EP—from songs entitled Virtue Lost to Woods of Eremae—are able to deliver what it poised itself to do.

Mind’s Eye is the brainchild of Celestial Aeon Project. Behind this project is one man alone, Matti Paalanen. Mind’s Eye is his third album, after having produced the albums Aeon 2 and Aeon 3 under the same project. Celestial Aeon is all about producing soundtracks that have that fantasy feel. They were originally produced for RPG or roleplaying video games. In fact, it has been received favorably by RPG directors and game masters. That’s not such a big surprise, as the tracks in this EP do seem well-suited for such kinds of games.

Game masters aren’t the only ones impressed by Celestial Eon. Matti’s music has been ranking all too well in Jamendo. It has consistently been at the top spot of the rankings week after week. Virtually all reviews are just as positive, with ratings of at least 4.5 stars.

The music of Mind’s Eye is not hard to listen at all. If you’re in the mood to meditate or in need of concentration, this album is the perfect match. The melody is relaxing and peaceful, and there’s none of that aggressive tunes that, although usually breathtaking, can be hard to listen to. Perhaps that’s why Mind’s Eye has become such a hit to its listeners: it’s what everyone needs to relieve stress.

The track listing of the Mind’s Eye EP is as follows:

Among the influences of the Celestial Aeon Project are Jeremy Soule, E.S. Posthumus, Hans Zimmer, Danny Elfman and Micheal Hoenig. All songs are produced via virtual instruments and sample libraries in a home studio. And if you can’t get enough of Matti Paalanen’s works, you should check out his other projects:

This work is licensed under a Creative Commons Attribution 3.0 Unported License and is available as a free album download (.zip or .torrent) from Jamendo.