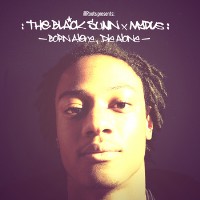 Born Alone, Die Alone is a 2009 album from Florida-based rapper and musician, The Black Sunn.

According to the emcee, he wanted ”to show the world that Baltimore has a voice that’s more than just drug dealing and murder…” He adds, “some people may not like that but I’m not one to hold back what I gotta say.” Even though this is a couple of years old, Born Alone, Die Alone has several great tracks that make it worth revisiting.

Starting the album is the R&B mid-tempo cut, Through the Sun Lyte. Partnering with Mydus, The Black Sunn throws down words like there’s no tomorrow, as the producer beautifully weaves catchy beats in the background. It’s a nice little opener that sets the mood for the album.

You’ll find a number of easy-listening tracks to enjoy on here. Songs like The Mellow, Our Little World and Black Soul List are some of the top cuts to check out. Each of these easily embody the strengths of the record.

The Black Sunn and Mydus work well together, they can craft likable R&B and hip hop cuts without a problem. Born Alone, Die Alone isn’t a perfect album, of course, but it definitely holds it own against other online records from the genre. Take a listen.