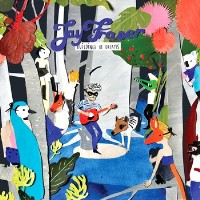 After packing his bags and leaving his hometown (Launceston in Australia), Jay Fraser carved a path where music takes center stage. He left for Europe and pursued his musical career, recording this delightful acoustic folk pop compilation.

Getting help from Richard Campbell of Orpheus Studio as well as long time friend, Tim Downey; he was able to turn the highs and lows of his experience into 10 solid tracks.

The album took four months to record and gave the singer a chance to showcase his blues inspired, acoustic folk cuts and share it with his listeners.

All those trying times including the initial risk of pursuing a music career has paid off.  Buildings of Dreams is his third studio album and chronicles what he terms as “the quicksand years.”

You’ll find an array of easy listening acoustic tracks  on here. Starting the album right is the bustlin’ cut, The Price on My Head. Contrary to the dark title, the single features upbeat country-style rhythms that can lift moods inside a gloomy room. Although there are quite a few standout pieces, one of the most radio-friendly would have to be, Walking A Fine Line. The single combines a blend of instruments. Although simple in arrangement; it manages to drive a nice beat and a good statement.

Aside from the “happier” tracks, the singer also delivers awesome downtempo melodic cuts. Singles like Four Strong Winds, Forty Miles East and Bastille Day; are soft, melodic escapes that are worth checking out.

Overall, it’s an awesome album from the Aussie singer. It’s the kind that grows on you and becomes a familiar friend over time. Take a listen and make sure to check out the artists’ other releases as well.