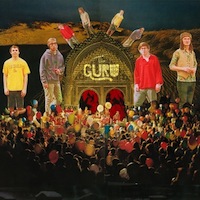 Add flavor to your old playlist with The Guru‘s first musical offering Native Sun. Recorded at Cottage Studios in Middleburry, CT, the four-piece band serves us eight funky tracks for the indie kids.

The Guru sets the stage with their opening track Arizona. Here, the listeners are welcomed with rhythmic, energetic electric guitar that balances between the boundaries of surf and pop rock. The raw male vocals also adds zest to the piece.

Coming from the same musical mold as the first track, Reel It In, establishes the band’s sound to new ears. Together with a cup of coffee or tea, this track will surely fire up those lazy workday mornings.

Incorporating a various instruments, Pirate’s Cove is a hodge podge of rhythmic beats and melodies that works harmoniously together. The strong electric guitar solo in the middle of the piece adds power to this track.

Closing up in a slower pace is Kodachrome Daydream. Ghostly, echoing vocals twists and swims smoothly with the grungy guitars.

All in all, The Guru‘s Native Sun is a solid release as it pleases the listeners while showcasing its great potential to the industry.