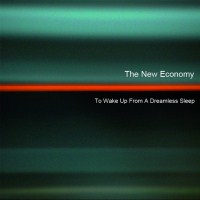 The New Economy: To Wake Up From a Dreamless Sleep

The New Economy is a three piece indie rock band from Germany that play music like they have been listening to a list of A-list indie Brit rockers all their life. They conjure up a mixture of danceable, catchy, and rockish tracks which is capped off with Brit sounding vocals.

To Wake Up From a Dreamless Sleep is the trio’s second full-length and most recent record. It comes with 9 easily likable tracks that are both dancy and even melodic in places.

This trio from Germany admits that their music “do not fit in the classical pattern of a rock song, they often take unexpected twists and turns;” citing that their varied experiences and musical backgrounds has contributed to this unique sound.

Indeed, the band, at first listen (especially if you hear “A New Morning” or “Thorn” first) will make you think that they are just another indie alternative rock band trailing on the remains of Franz Ferdinand and Kaiser Chiefs. However, tracks like Purple Sundown showcase a blueesy jazz feel while Mojave is a quiet, acoustic track somewhere in the realm of Coldplay.