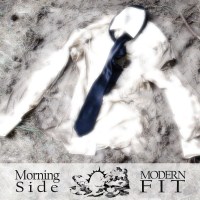 Atlanta based quirky indie rockers, Morning Side brings you this 14 track melodic pop rock compilation. Modern Fit is the most recently released album from this quartet of Byron Long, Daniel Gelbaum, Will Thigpen and Joe Costanzo.

Even though you might think that the band is straight pop rock, creating music in the sphere or Boys Like Girls, the thing is there are tons of hidden gems for this album. For instance, there’s no doubt that “A Love Song”  is a typical guy-being-resentful/chasing-after-girl track inspired by Max Bemis, but certain tracks like Beautiful Illusion reverberate with an 80s, Morissey-esque charm. Personally, it’s one of the best tracks in my opinion, although that pretty applies to every track after a couple of listens. Other interesting cuts from the album include He Wanted to be a Star and the dreamy Bright Eyes sounding number, Jack in the Box.

Essentially, the album is pretty good. Every single track has its charm and personality; making it an album worth playing over and over again. Citing influences as diverse as the Beatles to Led Zeppelin to Say Anything and Bright Eyes, Morning Side definitely did a great job for this album. Here’s to hoping they stay on the same track and only take a detour if it means creating an even better album.