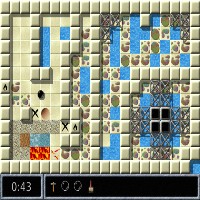 Some of us just love to be challenged and a quick puzzle game could do the trick. Enigma is a transport puzzle game that will definitely help exercise those brain cells and get them going.

The game was based on another game, Oxyd. In Enigma, your goal is to uncover identical colored Oxyd stones while trying to overcome puzzles, laser beams and countless mazes on your way. With over 600+ new levels and brain melting challenges, Enigma definitely knows how to capture a player’s attention. The graphics for the game are simple yet very polished. No shiny guns or colorful action sequences here. Although the game still does not support a two player option, it is very enjoyable and addictive when playing by yourself.

Majority of the gameplay makes use of the mouse which you can use to navigate the marble to interact with your environment. There is also a scoring system that can be used in the game. With this, you can track down how fast you are in finishing one puzzle or landscape. Some of the other perks of playing the game includes having over 500 different game objects, realistic physics simulation and of course, it’s absolutely free.

This mind bending game is released under a General Public License and is available in several languages.