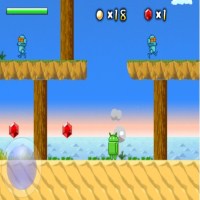 Replica Island is touted by many as “THE” Android game to have, that is if you haven’t got it yet. It is a free, open source game featuring retro graphics that will definitely get any old-school fanboy lusting after it.

Done in 2D and in the same vein as Megaman and Mario, the game is packed with entertainment and will definitely keep you busy for hours on end. The game was originally released back in March 2010. Now, it has garnered quite a following and has solidified its status as one of the most entertaining games in the Android market.

There are 40 levels in the game so make sure to clear up a good portion of your afternoon before playing. Because trust me, this is addictive.

In the game, you play a little green robot (that looks like Android’s mascot) and guide him throughout a mysterious island filled with interesting creatures on a quest to look for “The Source.” Replica Island features amazing retro graphics that will be hard to resist for many Nintendo fans.

The game lets you roll, run, jump, stomp and even fly your way through 40 levels. On your way, you’ll encounter a variety of enemines while collecting crystals. Not only does it feature an awesome gameplay, the graphics are quite cute as well. You get a range of beautiful and colorful environments that easily captures your attention. There’s also a deeper storyline behind this adorable little platformer. The game requires 5MB worth of flash storage space and can easily support various screen sizes.

For a free game, it’s actually quite polished. Sure, there are a couple of hiccups here and there that are exclusive to the Android firmware but it’s nothing to pull your hair about.  Why not dive right into the bandwagon and give this game a download.