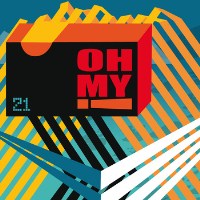 Maybe it’s The Strokes upcoming album that’s getting me into the new wave/hipster mood again; hence, couldn’t help but review Oh My! and their new wave flair. This Swedish band was formed in the small town of Sundsvall back in 2008. To say they “sound like” The Strokes is an understatement.  21 is filled with catchy and polished indie pop rock beats that mostly clocks in at 4 minutes or less. Giving you enough time to love it but not too much to make you tired of it.

The upbeat sound and energy characterizes Oh My!’s sound. Currently, the group is busy playing gigs in their area and looking forward to making a mark in 2011. The group is made up of Johan Åkerström, Martin Huss, Emil Källman, Adrian Karlman, and Adam Lodin. Enjoy 30 minutes or so of new wave madness from these fine Swedes. Ever since 21 was released in February 06, Oh My! has received tons of positive responses from both the online community and local fans. Their tight sound and energetic live performances add to the allure of this group’s music.

Long Time Ago starts out with classic jangly guitars and upbeat rhythm. Now, forgive me if I keep saying that these guys sound like The Strokes, but they actually do sing and play like them. If you weren’t a big fan of the “fab five” and snuck this song from in their album, you seriously wouldn’t know the difference. Although some might take this as a lack of originality, I think they sound great. It takes a lot to capture the great energy and fun music vibe that The Strokes have especially in their first album. These guys do it quite well.

Title track, Twenty One, is a cut that contains punchy beats and great vocal work. I love how the production values are quite clean and pronounced. Another hands-down favorite is the longest cut on the compilation, If My Head’s Alright. The jaunty guitars and head-bobbing rhythm is simply sweet.

Oh My! is currently recording and compiling new tracks in what will hopefully become their full-length debut album. Call them a Strokes ripoff or whatever you like, but no doubt these guys make good music.