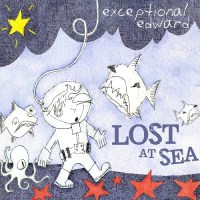 It’s not Ben Gibbard ! Exceptional Edward’s vocalist does sound a lot like him though. And even though their first debut album, Lost at Sea, may not be released under Deathcab’s name, it certainly sounds promising.

Lost at Sea from Exceptional Edward was released some time in 2008. Serving as their full length debut, after releasing, The Exceptional EP. The album is filled with swelling acoustic rhythms infused with poppy, sweet vocals. Formed back in 2006, Exceptional Edward creates music laced with indie pop vocals and melodies. These Ohio natives definitely know how to appreciate guitar solos and sparkling acoustic strumming. As mentioned, the vocalist does sound like a Ben Gibbard doppelganger, although there are moments when its clear that he still needs to control his voice more. (It sometimes escalates into an emotional whininess in some parts.)

Despite these minor things, Lost at Sea is actually a pretty solid album. Listeners can enjoy “Change my Mind” and its up-tempo beat and quirky guitar work; giving a nice contrast with its church organ opener. On the other hand, “Buried by Gray” is more melodic and reflective. This is the track where the vocals occasionally border on whiny. To the band’s credit, after one or two plays of this track, you just forget the vocals and get lost in the beautiful soaring guitars and emotional lyrics.

Exceptional Edward is made up of Jason Turner-lead vocals/guitar, Dan Gillis-lead guitar, Bobby-drummer, and Casey-bass. Ever since Lost at Sea came out, the group has had considerable notoriety among indie acoustic pop fans everywhere. Currently, the group is working on their third album, Put Out the Fire, which will be re-released under JMD Records/Universal Music Group.