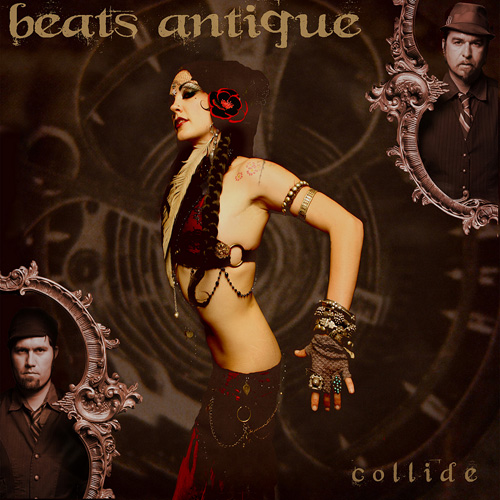 Collide by Beats Antique might be several years old but it has aged beautifully. The album combines a fusion of electronica with world beats created by two formidable artists. It’s then topped off by the hypnotizing moves of belly dancer, Zoe Jakes.

The main maestros behind this eclectic sound includes, David Satori and Tommy Cappel. Both artists come together from a host of different backgrounds, having performed at their own respective bands and and musical outfits. Together with Zoe Jake, Beats Antique creates an explosive fusion of Western hip hop style beats laced with an undeniable exotic flair.

Collide is the group’s second compilation and came at the heels of the wildly popular debut record, Tribal Deviations. Composed of 13 tracks that throb and infuse diverse sounds; you can expect a hint of jazz, hip hop, belly dance, Middle Eastern music, Afro beat as well as electronica inside.

Opening single, Beauty Beats starts the hypnotic rhythm with a slew of a electronic beats before introducing sitar-like strings and transforming into a beautiful spark of world music.  It’s a courtship of sorts, slow and steady at the onset before erupting into a rapture of sounds. It definitely sets the mood perfectly for the other tracks.

Back to back cuts, Scratch and the Roustabout stand on opposite sides of the spectrum. The former is a drum filled Eastern style extravaganza. Featuring a mesmerizing sway, this is probably one of the best cuts on the record. Meanwhile, the latter cleverly makes use of clown and carnival sounds. It has trumpets and trombones coupled with what is probably the most danceable clown sounds ever made.

With a world overtaken by DJs and a vibrant club scene, Beats Antique turns the tables on the traditional electronica beats and creates intelligent club music for those whose ears  as well as senses are open to it.

Personally, this is an album I thoroughly enjoyed. It’s different and worth a look especially if you’re not sure what to make of world music at first. Collide will hopefully throw away misconceptions or definitions and leave nothing but an appreciation for the beauty and uniqueness of sound and music throughout the globe. Related Links:
Beats Antique Official Website
Beats Antique on Facebook
Beats Antique on Twitter
Beats Antique on Wikipedia
Beats Antique on BandCamp