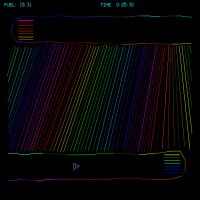 If you think that a game with a bunch of colorful lines doesn’t deserve to be called a “game” at all, then Cygnus just might change all that. Now, in a world where competing for realism is what sells most video games, Cygnus attempts to stand apart. This deceptively simple game will actually give you quite a good challenge.

In the game, you are left to maneuver a ship that has no means of offense. You are basically in pursuit of what I presume to be another ship that’s colored in red. You cannot fight or shoot down anything since you don’t have any weapons. The one thing that you can do, though is simply maneuver, rotate or thrust your way down the goal. Think you can breeze through this game? Give it a go.

Cygnus has been likened a lot to a shoot’em up game released back in 1982, Gravitar. Unlike the latter, Cygnus isn’t a shoot ’em up game. As mentioned, all you can do is move forward or slow down as you go through each room. Even though each room might just look like a bunch of lines drawn together, it’s actually more challenging than it seems. The moment you overcome one room and every single obstacle in it, the next succeeding room immediately becomes even more tougher. The game takes a long time to complete and master, so expect to die about a million times before you actually get everything right.

If you are looking for something challenging or if you simply want to fry your brain a bit, then this is the perfect game to download. Even though you might not be completely impressed with the graphics, it does have a very cool gameplay and an awesome soundtrack to go along with it.