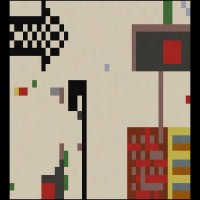 When you first see Tottenham, it might look weird but it definitely has solid gameplay and will assure any player a good time. In the game, you play a demolitions expert that has to clear the path so that subway connections can be made from point A to point B.

This is the latest release from indie developer, Theta Games. They have several other games up for download on their website, some of the titles include Orange, Composition Piece, and R- Theta II.

Tottenham might be the type of game people would look over because of its simple graphics, but it’s actually a fun and very cool arcade game to check out. The game was actually inspired by the mosaics of the late Scottish sculptor and artist, Sir Eduardo Paolozzi, right in Tottenham Court Road Station in London. As mentioned, you are a demolitions expert who has the task of clearing up a path from one point of the subway station to another in order to upgrade the system.

To do this, you’ll need to place explosives on the colored walls in order to break them. Charging the explosives can be done by pressing the spacebar key. Once you do, you need to steer clear of the path or at least keep your distance since flying debris can kill you. There are also times when pests show up in the area, so these need to be eliminated as well.

Although the graphics might be a bit of a put-off, don’t let that stop you from trying out the game because it’s quite fun. The game plays for about 30 minutes or so from start to finish. Everytime you finish a level, it’s automatically saved so there’s no need to keep repeating levels.