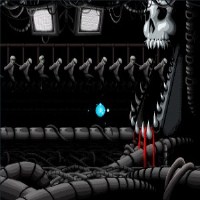 Do you judge the quality of a game by how short it takes to play them? If you do, then you might want to steer clear from Rebirth. For those who are a little more open minded though, here’s the story.

The game offers only five minutes worth of game time. However, in these five minutes you’ll be taken for a ride into a world where the unreal, bizarre and unnerving is the staple. Masterminded by Daniel D. Guertin, the game echoes with disturbing imagery, odd plotlines and surreal landscapes that you might want to play with the lights on for a bit. If you are looking for something different then go ahead and give this game a download. It’ll be five minutes well spent.

The game is a bit out of the box. It’s purely experimental so don’t expect it to actually, well, make much sense. Developers for the game suggest that the game revolves around three main themes: sacrifice, faith and rebellion. Whether you think the game really focuses on these elements or not, one thing’s for sure; it’s certainly an unusual game.

In the game, you play a character that is born in world where life is completely outside down. Values like honesty, integrity, sharing and loving are completely nonexistent. In this world, only greed and competition are important in order for you to succeed in life.

The entire game is perfect for anybody who loves Silent Hill or Dead Space and other macabre, disturbing games. The soundtrack is very atmospheric which is perfect for the dark, brooding atmosphere of the game. Game graphics is quite good  and very detailed. It’s certainly worth downloading and trying out.