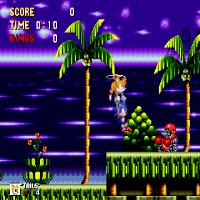 If you are a big Sonic the Hedgehog fan and enjoy the many titles that was released under Sega back in the day; you’ll be glad to know that now there’s a free version that you can download and play. Open Sonic is a free Sonic game that reflects the original style of gameplay (along with some modern twists). The game is released by opensnc.sourceforge.net. The cool thing about this game is that it contains almost everything that you’ve come to love from playing this blue hedgehog. The graphics are great and you carry almost every skill that Sonic and his friends have.

Enjoy this awesome open source version of Sonic and his friends. You’ll definitely have a grand time getting in touch with your inner kid. Being an open source game, there is a bit of variation in the gameplay. For this one, you get to engage in”cooperative play” where you will need to use all three characters [Sonic, Tails and Knuckles] all at one time. There are instances when the game forces you to use another character, ensuring that all three are moving forward as you go on your way.

Unlike typical Sonic games, this one allows players to think of a way to get past some points in the game; mainly capitalizing on one characters strengths or abilities at any given time. Also, like the original games, you can use “Sonic-Style Physics,” meaning you can go around 360 degrees.

Graphics for Open Sonic are quite beautiful and even almost up to par with the original. There were some issues with the sound but somehow they managed to provide a solution to that.

Overall, the game is quite fun to play. Although it is a bit short [only two levels] there is a level editor that you can use to add and edit existing stages. Moreover, it’s also available in several languages ensuring that even international fans of this speedy blue hedgehog and his friends can enjoy this amazing game. Go ahead and give it a try.