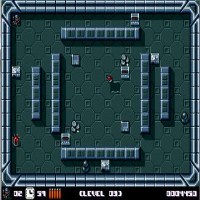 Combine old school graphics and some basic shooter gameplay and you get a retro looking shooter game in the form of Robotz DX. True to most retro shooter games, this one is incredibly difficult to master. All 30 levels will give you a good run for your money as you go through each stage.

Initially based on an Atari game, Robotz; this game is new and improved yet retains the old school touch quite awesomely. Remade by Josh Monkman, the game beautifully captures the feel and gameplay of the original. Retaining some of the essential elements while adding a more updated look to capture the hearts of modern gamers. It’s no joke that the game is difficult to beat so gather up patience and a lot of free time before diving in.

In the game, you play Jacob, a military personnel that gets summoned by the chief of the military to help them out with a “little” problem. Basically, you’re going to head over to the base and fight off the robots that have run amok in the base. There are 30 levels to the game and your objective is to kill off all the robots in each level. Of course, it’s not as simple as shooting them. Before you can kill off certain robots, you’re going to have to destroy the “shield generator” ( the red pulsating thing.) Also, did I mention that you have to kill ALL of the robots in just 60 seconds?

Yes, just one minute to blow up every single bot running amok in the vicinity. This may seem impossible. Well, it’s not easy but actually doable. To add to the difficulty, all it takes is one shot to kill you so you better watch your back while hunting them down. If you do die, don’t be surprised if you find yourself in a different level from before. Each level is randomly generated so each time you die, you won’t return to the same place as before (although sometimes it does go back.) This adds a whole other realm of difficulty and orientation to the game.

Overall, Robotz DX is a very challenging game. Old school gamers that are familiar with these types of games will have a great time playing it. Of course, new gamers might find it uber-tough but that’s part of the challenge. Give it a go and see how long you’ll last.