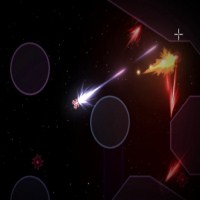 Radial Plus is a unique little action game that was initially created for the Something Awful Game Dev Challenge. Although it may look like a typical arena shooter there is one cool twist with Radial Plus’ gameplay. Instead of directly hitting the enemy to take them out, you would need to find a suitable angle and fire away before you can actually cause damage to the enemy ship.

It’s amazing how one little shift in game rules can affect the entire game.  This minor change in gameplay results in a creative and challenging game that requires you to think ahead of where your next shot will go.

Apart from this, the game is quite enthralling both in sound as well as in graphics. It’s this little detail that makes this game worthy of your time.

Gameplay is quite basic for a shooter game. You use the arrow keys to maneuver your little ship around. If you want to shoot, aim or boost, then you’ll need to use the mouse. The basic controls are heightened by the impressive visuals that come with the game. Although most of the graphics are just blocks, the effects are quite believable especially the sound.

If you are good at doing bank shots, then you’ll definitely find this game a piece of cake. If you are otherwise, then prepare to be challenged. The game becomes difficult especially after you become surrounded with enemies that are firing off left and right. You won’t die that easily though, just avoid any successive shots and your ship should still be moving along.

The only downside to such an entertaining game is that it’s rather short. Nevertheless, it’s still worth trying out.