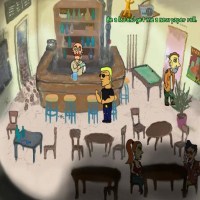 Snakes of Avalon is a dark game that’s all about “alcohol incapacitation and people obsessed with murdering their other half.” Playing the game means you have to be prepared for  a lot of weirdness. In the game, you play Jack; a hobo alcoholic who speaks with talking fishes and posters. One day, he overhears a woman and his lover plotting murder against her husband. Jack decides he won’t accept it and tries to stop them.

The game features 90 minutes of surreal gameplay and storyline. If you play this game, keep in mind that the aftereffects might last longer after you’re done. It’s designed and coded by, Igor Hardy and  Alex vand der Wijst while Thomas Regin is credited for creating the soundtrack. Give it a go. Here are several things you can expect from this out-of-this-world game. First, expect a weird story about murder and deceit. There are four parts to the game; giving you up to 4 hours worth of fun gameplay. Second, expect a lot of hallucinations. You’ll find Jack talking to fishes and posters. There’s even a skeletal Moose. Other weird things to expect include a man that simply won’t come out of the toilet, possible cannibalism, time-travel, brutal killings and even a tragic love story between and a man and his fish.

The game is very straightforward. You can roam free and check out every single nook and cranny. The point and click game controls make it easy to maneuver Jack around and explore your environment. Moreover, there are several items you’ll need to collect which you can also use to solve puzzles later on.

Graphics is interesting as well. It looks like it was painted which actually adds to the game’s personality. The soundtrack and voice acting are also quite good.

Pretty much, Snakes of Avalon needs to be experienced for you to actually “get it.” Underneath all the weirdness of the game, I’m sure there might be some hidden message. I just haven’t figured it out yet.