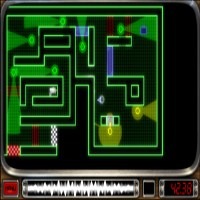 Subsonic takes the whole idea of stealth games a bit further. Normally, when you play games like this, there’s usually some device that you use to keep your noise level down. Whether it’s as simple as footpads or some hi-tech gadget that cushions your footsteps, hardly anybody in the game world has ever thought of actually creating a gadget that sees soundwaves. Well, until now, that is.

In Subsonic, you play an agent for a group of merceneries who specializes in sound technology. Equipped with your sound-vision goggles, your task is to finish the objective for any particular level and get out alive.

You’re going to have to distract the enemies, break through glass or simply silence your footsteps to ensure that you get out of there safe and sound.  It’s an interesting take on a regular stealth game. It’s a bit short but gameplay is quite good and interesting.

Subsonic contains pretty cool elements and comes with an extensive game trailer. It makes sure that you get a thorough briefing on what it means to be a Subsonic agent. Since you are a mercenary of sorts, you’re going to have to keep a low profile while infiltrating the enemy base. You also get to have cool gadgets at your disposal of course.

In each level you’ll find enemies lurking around everywhere. Luckily, most rooms also give you a handy selection of weapons that you can use. The blue guns are perfect for blasting sound waves that distract the guards. On the other hand, the red weapons are ideal if you want to break glass. If you simply want to sneak behind a guard while he’s looking for intruders the other way, you can use the white gun to help mask your footsteps.

Although the game is rather short (just six levels of gameplay), it’s nevertheless entertaining. The game was actually created by a bunch of students as a project for Digipen.