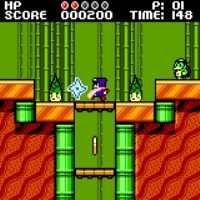 If you are like me and you simply cannot resist a good ninja platformer, then you’ll want to include Ninja Senki on your must-play game list. The game was designed by Jonathan Lavigne and was originally based on the Super NES game Ninja Jajamaru-Kun and Mega Man.

Although it’s done in simple 8-bit, the game is a refreshing platformer that will satisfy all your shuriken tossing needs. In the game, you play a cute blue ninja named, Hayate, that must avenge the death of his clan’s princess, Kinuhime.

Ninja Senki is a lot like playing Mega Man especially when it comes to gameplay. However, instead of robots, you fight off monsters, deformed ghosts, monkeys and of course, fellow ninjas that fantastically burst into pixelated gore once you kill them. The game excellently incorporates both old school and modern style of gameplay achieving a great balance between the two.

You can play 16 levels of this awesome platformer. Although there are times when it does feel a little too drawn out, chances are, you’ll still find yourself enjoying it. The graphics alone are one of the best I’ve seen, for pixel art. It is colorful and captures your attention easily. Perfect for attention deficit gamers like me. Storyline is pretty straightforward. There are no hard twists and turns instead you are simply a ninja seeking revenge, killing bad guys along the way.

The game does play like Mega Man except you wield a shuriken and that you’re limited to a horizontal throw. Moreover, you can easily jump over huge distances (okay not that huge) which you’ll definitely have great use of throughout all of the game.

Some things to remember though, the game doesn’t have a save option so clear up a good portion of your time before starting. You might also want to check out the multiple endings that the game offers. See how many alternate endings you can get.