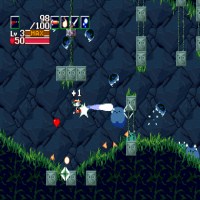 Cave Story is a cool Japanese platformer that was originally released back in 2004. Despite the age, it’s still winning plenty of gamers, thanks to its fun and engaging gameplay.

The nice thing with this game is the fact that it’s so simple. Graphics are retro 8-bit yet it manages to be endearing still. The soundtrack, like the graphics, is simple but it certainly lends some lovely depth to the game. Of course, the gameplay is equally lovely.

The game was created by Daisuke Amaya and released in Japanese, but theres a full English patch that you can download as well.

Ever since it was released, the game has gained a steady indie following. Indie gamers have praised it as one of the best platform games out there. Because of its popularity, independent developer, Nicalis, teamed up with Nintendo’s Wiiware; breathing new life to the game.

In the game, your character wakes up inside a cave with no memory of how or why he’s there. Your amnesiac character must then explore the cave to try to piece together what’s going on. Pretty soon, he stumbles across weapons and a plot by the Doctor to try and take over the world.

Luckily, you do have weapons at your disposal. There are a total of nine available but you can only bring five at any one time. You can easily toggle between your weapons as you fight plus, there’s an option to upgrade each one up to level three. There are also other gadgets and helpful items you can use like a jetpack as well as life or health items.

The gameplay is really good. There are plenty of enemies looking to get rid of you so you have to be on your toes every single time. There’s also a neat little revelation towards the end of the game that might come as a surprise.

In the end, the game deserves tons of praises not just for the gameplay, but the overall feel of it is just wonderful. It’s often tough to like a game if it’s overly simple but with Cave Story, simplicity works best.