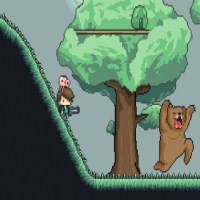 Developer Jason “Jajitsu” Boyer has come up with one of the most entertaining, not to mention very funny little platformer called Jable’s Adventure. It’s about a kid who has a squid on his head. The squid suddenly shows up one day and proclaims Jabel to be the hero. Meanwhile, Jabel is curious about this “hero” thing and decides to go along. He then sets off  in these adventures where he bother’s mermaids, shoots bears and other weird creatures.

This fun game contains amazing graphics that  you didn’t even think was possible in pixel art. Even better is that the game contains an awesome soundtrack (which you can download separately) as well as great gameplay. It’s a bit short at under an hour, depending on your speed, but it’s definitely a fun play. So if you have nothing better to do, have a go at playing this highly entertaining platformer. If you don’t exactly fall in love with the game, then for sure you’ll adore the soundtrack that comes along with it. Kevin Carville from Panda Studios provided all of the tracks for the game and sure enough, it fits way better than a glove.

Anyway, as for the game itself. It was created for over a year by Boyer. He’s been in the league as an indie film creator with his other title being, Cat Poke.

Gameplay for Jable’s Adventure is pretty basic of a platformer. There are no special controls that you need to learn or master. However, the real gem of the game lies in its funny humor. Even though you may think it’s trite, you can’t help but laugh. There are also several save points throughout the game. You just have to look for a particular character and give him a high five or slap his hands. This will automatically save your game. If you want to restore your health, you can simply drink juice and it will boost your life right away. Meanwhile, for increasing hit points, you can go ahead and collect fruits as you go.

In the end, the game isn’t perfect. There are occasions wherein you have to head back to places you’ve already explored which can become a bit annoying. Nevertheless, the humor and the fun gameplay save the game from total failure. In fact, it’s perhaps one of the easiest games to love. Check it out.