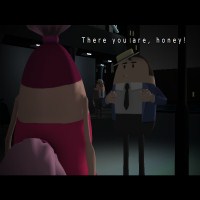 I Was a Vegas Showgirl

I Was a Vegas Showgirl places you in the shoes of Sissy O’Leary, a Vegas showgirl that has to do the tough task of stealing a hat from one of the most notorious Vegas casino owner in town. Who sends you on your little errand? Your boyfriend of course and somehow you oblige to it.

This is where the challenge starts. Your going to have to pull out all the stops and charm your way through a variety of people. This includes bouncers and other men you might encounter until you manage to get to the big boss himself.

Created by Alasdair Beckett over at DagePort, this is the first complete game using Dage. Check it out and enjoy. Now, how hard can it be to steal a hat from a tough casino boss, right? Well, Vegas Showgirl shows you that it can be a bit tricky and if you are not careful, you could end up croaking.

In the game, you play Sissy O’Leary. As a request from your boyfriend, Billy Lyons;  you set about on your way to stealing a Stetson hat. Making sure that you bypass and talk to every single person that you need to be associated with to get to the big man and tough casino boss, Mr. Stack-O-Lee.

The game itself is a bit short, clocking in at under an hour of gameplay. However, it is quite entertaining and fun to play. It comes with several puzzles that you would need to solve; adding a bit of variety into an otherwise typical point and click game. Every time you come near a person or object, pop up text appears. Giving you information or letting you chit chat with another person. You can also pick up and carry several items with you. Although there’s a limit to the number that you can take in your inventory, just around three. Simply use WASD keys to move about and maneuver your way around.

Overall, the game contains simple yet awesome character design and a cool gameplay. Several people complained about getting bugs although it worked fine for me. Go ahead and check it out.