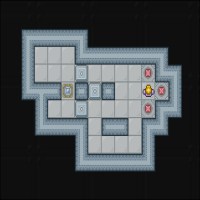 If puzzle games are more your thing, Johnny Cube should prove entertaining. This cool puzzler runs in the same vein as Sokoban. The game involves plenty of block pushing and puzzle solving. Even though it’s quite new (released just this month by Primož Vovk, otherwise known as Blodyavenger) the game is already winning good points for its smooth gameplay.

This is the second indie release for the developer, following the footsteps of the 2D game, Obelisk Blocks.

It’s definitely a game worth playing. The graphics are clean, gameplay is much better and smoother than Sokoban and it’s certainly quite enjoyable.

In the game, you play a factory worker named John who has to keep moving blocks around the clock at the command of his boss. Basically, your supervisor has tasked you to keep everything organized and not go home until you finish it. You have to organize the blocks in the X spots in order to proceed to the next level.

When playing, there’s only one box that you can move at one time. In case you hit a rut and unable to find the right route or simply make a mistake, you can always hit backspace. This option is limited though. You can only do it once every time you make a particular move so always be careful about when to use it.

Overall, there are no absolutely difficult puzzles incorporated in the game, but it still provides an entertaining and enjoyable time. It’s a very polished game that is worth downloading.