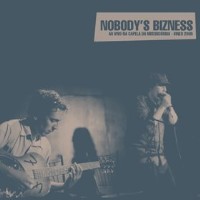 If you are in the mood for some good old blues, Nobody’s Bizness can help you in that department. Their music is characteristic of delta music that reminds plenty of blues lovers out there just how this music originally came about.

Nobody’s Bizness’ Ao Vivo Na Capela da Misericórdia is a compilation of acoustic blues that exudes with a touch of the rural country. It’s a poignant attempt of the band to keep the Mississippi delta music alive and kicking.

For the most part, they succeed and lets you imagine that you’re in some bayou, lounging away at dusk.

A touch of powerful Joplin-esque vocals from Petra and great guitar work from the band, gives this album a great fusion of the old and the new. Blues simply cannot get more authentic than this. Ao Vivo Na Capela da Misericórdia covers songs’ from the likes of  legendary blues players, Robert Johnson, Chuck Calhoun and US blues bassist/ vocalist Willie Dixon.

For those looking to get acquainted with delta blues but don’t want to have to dig up just to find them, listen to this band and you can pretty much taste the blues essence  in each of the track.

Related Links:
You Are Not Stealing Records Website
Nobody’s Bizness on Myspace

This work is licensed under a Creative Commons Attribution-Noncommercial-No Derivative Works 2.0 Generic License.