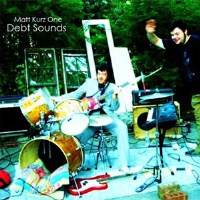 The Matt Kurz One: Debt Sounds

One man band, Matt Kurz, knows how keep the drums on a steady beat, the guitars wailing and the bass guitar slappin’. He also knows how to add his signature growl and keep everything interesting. Perhaps the biggest draw is that this guy can actually play all these instruments at once!

Debt Sounds is the first album from this multi-intrumentalist/one-man-band who dubs himself, The Matt Kurz One. It’s a mix of old school rock and roll with some upbeat indie hipster feel. Each track is quite catchy, making you want to head bob or tap your feet.

Here’s a little background on the main man and how he decided to play all the instruments himself: “Matt Kurz was born on Long Island, New York on September 19th,1980. Throughout his teen years he was in various local bands playing various different instruments. After being in a series of bands that instantly imploded, he decided to give up on music. This did not last very long. After having recurring dreams of an old bluesman who played a snaredrum with his left foot and a bass drum with his right while playing guitar, he decided this was a sign and should try it himself.”

Debt Sounds is essentially a rock and roll album that’s catchy and impressive. Opening with the James Brown tribute song of sorts, “Solid Gold Coffin,” the album kickstarts the onslaught of upbeat rock with a slight 50s vibe. The lyrics were taken from Brown’s interview while he was under the influence of drugs. Another song that was initially meant as a “love song” according to the dexterous singer, is “Hey Renee.” The track is quite catchy and one of my personal favorites in the record.

Find more artists like The Matt Kurz One at Myspace Music

The compilation is a good mix of styles that highlights Kurz unique playing. Most of the songs contain enough hooks to grab and impress listeners.  Of course, it’s nowhere near perfect. As Randy Jackson might put it, “the vocals are sometimes pitchy, dawg,” nevertheless, the instrument work and the tunes are enough to make you listen.

The record is available as a free download at Quote Unquote Records and it’s licensed under creative commons.