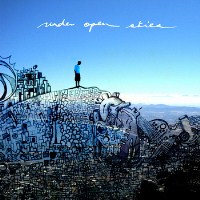 Sometimes all you need is simple, laid back pop music to keep you company through the day. If you’re feeling that way right now, check out what Danny Stevenson has to offer.

Under Open Skies is the first of a two part EP, featuring tracks created by Stevenson over a span of 2 years. He felt that the songs didn’t go together well as a set of one compilation so he divided it into bite-sized pieces for listeners to enjoy.

This first one, Side A, is composed of upbeat indie acoustic pop cuts that feature the singer in a more happy-go-lucky mood. The second part, Side B, has a more experimental, edgy mix of tracks according to the singer.

According to the artist he was “inspired to write music for as long as I can remember because of the feelings that music is able to evoke. It’s sometimes hard to pinpoint exactly where that inspiration comes from and at times if feels like a song emerges from some unknown place – from either deep within the subconscious or perhaps even beyond the self. “

As mentioned, some of the songs here are a few years old. Starting with the single, The Journey Back, the song is a melodic pop rock masterpiece that reminds me of a quieter Our Lady Peace. Meanwhile, other cuts like A Promise, are quite easy to listen to. The singer still arms himself with his acoustic guitar and serenades the audience. Title track Under Open Skies, is a gorgeous cut that’s enhanced by the artists’ heartfelt vocals. It’s a typical acoustic pop song that’s easy to like.

The EP is a nice introduction to Danny’s sound. It is simple in a lot ways but also quite endearing. Go ahead and listen to this and when you’re done give Side B a listen too.